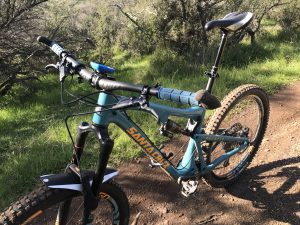 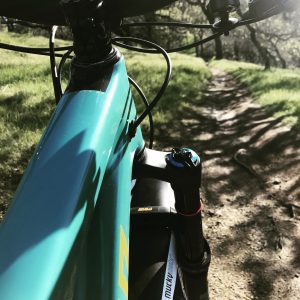 In 2013 when the first Santa Cruz Bronson came out in the Tennis Ball Yellow, everything about the bike made me want one.  I was completely fine with my bike and didn’t get envious of any of the new ones coming out.  I just kept slapping new parts on my 2005 Cannondale Prophet and riding all the same trails with my buddies.  But that color just spoke to me.  Then when I started reading people’s reviews I really fell for it all the more.  Next thing you know I was on the site just looking at it and wanting it more and more.  However, the price tag just was completely out of my budget.  So I just kept doing what I was doing and figured I’d have to wait a few years until you started seeing them on the used market at a much more reduced price.  So I started putting money away.  Slowly.  No I mean sllllllooooooowwwwwwwlllllyyy.

While I was waiting to have the money I rented one while in Downieville, Ca.  It was super fun but for some reason just didn’t blow me out of the water the way I expected to be wowed.  So that actually knocked my anticipation down.  Even riding the XL seemed like the cockpit was just a hair small.  So that experience made me a little more apprehensive to spend that big money on a new bike.  Around that time I had read a lot about what Yeti was doing and recommended the Santa Cruz Bronson and the Yeti SB575 to a friend.  He ended up buying the 575 and really spoke highly of it.  That impression really stuck with me.

By the time I had the money to actually buy a bike and not have to cut corners on what I wanted in the build the time came to make the decision of what to buy.  I found myself closely following the Yeti SB5.  However it appeared the new model was going to have internal cable routing so I waited until the next model came out a few months later.  I was right they changed the frame.  Ho 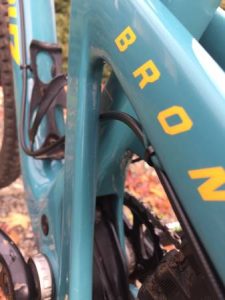 wever, they weren’t the only ones to change their frame.  The guys at Santa Cruz updated the Bronson to what people were calling the v2.0. I found myself looking at the Bronson webpage and the Yeti webpage almost equally.  There was also a new slate color on the frame that I liked.  I wasn’t crazy about the letter color, but my customization of several bikes told me that decals and paint can easily be changed.

For one reason or another my savings for the bike got diminished and I found myself with a lower budget than what could buy a new build bike.  I then started checking Pink Bike & Craigslist for the Bronson and the SB5.  However the SB5 frame that I wanted was brand new and wasn’t going to be on the used market for probably at least another 6 months.  So I started considering the SB6.  It’s a really pretty bike.  The Yeti crew really has their act together.  None-the-less I almost bought a SB6 but it got purchased out from under me.  Then I ran into this gem of a Bronson for what appeared to me a steal.  I couldn’t knew that from everything I read about the bike I couldn’t go wrong.  I jumped on it and drove down to meet the guy as soon as possible.  I didn’t want to see this one slip away like the other one did.  I gave it a little test ride around and the new frame in L actually fit me very well.  I bought it.  While driving away I felt a little sad that I didn’t get the Yeti that I was leaning towards.  I left the meeting spot and headed straight to the trail.  OMG, this bike is freaking AWESOME!!!  By the time I finished my ride my grin was ear to ear and any feelings of sadness or buyers remorse were completely gone.