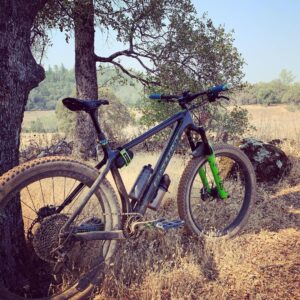 Backstory: I was looking for something to make some of my normal trails a little more fun and challenging.  I decided it would be fun to try a hardtail since I hadn’t ridden one since the 90’s.  Initially I purchased the aluminum version of the Chameleon and had a blast riding it.  I didn’t think it mattered to have a carbon frame because in my mind it was just extra money to save weight.  After riding the AL version for awhile I realized it wasn’t only about weight.  On the AL version I could see the bottom bracket sway when I was hammering down on it or even just putting my foot on the pedals stopped.  I sat on a buddies carbon hardtail and boom, next thing you know I was looking at carbon frames. I ended up putting all the stock parts back on the AL and sold it for about what the new carbon frame cost. I also decided to upsize the frame to an XL.  I figured since I was in between sizes it may be a little more stable on the chunk with the XL frame.  Overall I’m on the fence as to whether or not I should have upsized the frame, but as far as the bike goes it’s been a ton of fun.  I can’t believe that my fastest downhill times on a fairly chunky local trail is just as fast on my hardtail as it is on my full suspension.  I won’t hesitate to tell anyone to go out and try a hardtail.  It definitely spruces up some of your trails because you choose lines differently and it has helped me realize how overbiked I was most of the time riding the Bronson.