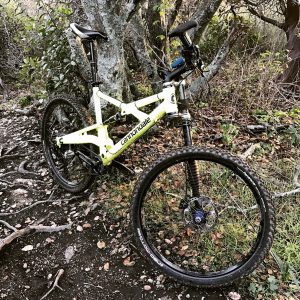 I started riding mountain bikes in the early 90’s.  For a handful of reasons I took a bit of a hiatus after high school.  In 2006 I decided I wanted to get back into riding.  I went to the bike shop and walked in and told the salesperson I wanted a mountain bike.  I’ll never forget his response.  He asked me, “What kind of mountain biking are you going to do?”  Downhill, Cross Country, All Mountain, and probably a few others but to tell you the truth I completely zoned out at that point.

At the time, the last mountain bike I bought was a Giant ATX 760 circa 1991.  I think there were 5 bikes in their “mountain bike” line back then.  I bought the 760 which was third from the top of the line and it was about $500.  The top of the line 790 was $999.  Prior to walking into that bike shop in 2006 I thought to myself I was going to spend like 2 grand and get a bad ass bike.  Little did I know, as Ice Tea has said, “Shit ain’t like that!”  I then explained to the salesman at the shop I wanted to ride a bike, on the dirt, all over the place.  Apparently that was called All Mountain (at the time, lol).  The Prophet had 5 inches of travel which a lot of people thought was ridiculous for trail riding and also had hydraulic brakes.  Since the bike was a “last season” bike it was marked down a lot more than the newer Specialized I was testing.  Ultimately the brakes were the deciding factor.  That and once I got on it, it didn’t feel any different even though it had half a fork. 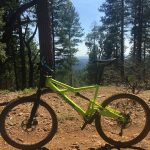 Over the years the only thing that is original on that bike is the frame.  I also ended up picking 2 more of them up for $500 a piece for my fiancée and my son.  At one point I bought an XL just so I could see if I liked that frame size more.  That’s actually the one pictured in white. The main reason for doing that was that they could use my hand me down parts, plus I was super familiar with working on it.  The biggest change to it aside from upgrading the brakes and drive train is that I put 650b wheels on it and a slack headset to keep the 67.5 degree headtube angle even though the frame is set to the XC position.  That position needed to be set so the rear wheel didn’t rub the frame with the bigger wheels on.  It also raised the bottom bracket up a little.  All in all I’ve been really happy with the frame and all the things I could do with it over the years.  However, the time is coming that I purchase a new bike.