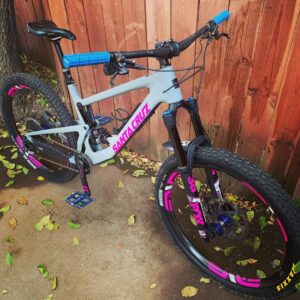 Backstory: I test rode the V3 when it first came out and did a video on it.  At the time it didn’t feel like it was so much better that I needed to sell my bike and get it.  However the one thing that stuck in my mind was how plush it felt and how good it climbed despite feeling so plush. Fast forward two years later and the suspension on my V2 needed to be totally reworked because it was long over due.  I started looking at just buying a new fork and shock but it was hard to convince myself to spend that much.  However Moonlight leatherfoot started talking about wanting some carbon wheels.  Since I was building a new set of wheels already I offered Moonlight to buy the set that would come with my new bike if I found a bike with wheels he wanted.  He was game and I was on the market.  I was in love with the grey color from the time it came out and now that it was a year old I could find them popping up on PinkBike. I ended up finding a guy in Georgia that was selling his and although I had never purchased a bike that I couldn’t see in person I took a chance. Since then I’ve been completely dumbfounded that I didn’t like the bike more when I first rode it.  Honestly, I think it was just the thought of the money that I didn’t have so I subconsciously told myself it wasn’t worth it. Now that I’ve been on it for awhile I must say Santa Cruz knocked it out of the park with the V3 and I can’t even imagine what they will do to make things better on the next model.  Until then, I’m totally stoked with this thing.  Plus the pink graphics that Stikrd did make this thing jump out at ya!