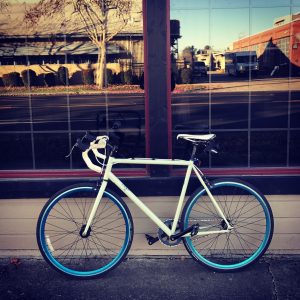 Ultimately the inception of buying this bike was to burn more calories so I could drink more beer and make lousy diet decisions.  All joking aside, the truth in the matter is close.  I work about 16 miles away from where I live.  I was trying to figure out how I could lose weight because I was gaining more than I was happy with and I didn’t want to make huge diet changes.  At the end of the day losing weight is about calories in versus calories out.  Which way you go about tipping that scale is up to you.  But in my eyes, no matter what “diet” you are following, that is the real reason you lose weight.

Anyways, I also wanted to get more time in the saddle.  I’m a slow climber.  If I come back to this page in 5 years and read what I wrote, I’ll still be a slow climber.  In my best shape I’m just not a climber.  I’ve come to terms with that.  Just because I’m slow doesn’t mean I don’t like to work on trying to be faster.  So that was another part of the single speed.  I figured the more time I can get in the saddle the stronger my legs will be and the better mountain biker I will be.  I didn’t want to be, nor do I still want to be, a roadie.  I also couldn’t bring myself to spend a bunch of money on a bike that is riding a flat 32 mile round trip.  I originally started looking at bikes on Walmart because I figured I could do this commute on a single speed (SS).  However after looking I quickly had a few reasons that the Wally World bike wasn’t going to cut it.  The main one was the cranksets they had didn’t have the ability for me to swap chainrings.  I quickly ended up looking at what I could get at a bike shop.  At that point there weren’t a lot of choices before somehow I ended up spending a bunch of money.  I found the Raleigh Back Alley and a local shop that had one and it was on. 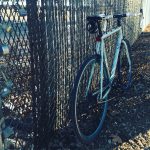 I bought the bike and it really became so much more than what I expected.  I now had a bike that I could ride around town (I live in downtown Sacramento) that I wasn’t going to be totally bummed if it got stolen.  However I could put SPD pedals on it and still have a great bike that I could push and be efficient with on my commute.  Initially I rode the bike with the flat bars that were on it and ergo bar ends for different hand positions.  I think I rode it like that for a few thousand miles and eventually just wanted to have drop bars.  Some days when coming into work with a big headwind I just wanted to be lower.  So I bought some cheap generic (Chinese) drop bars, new brake levers, and some grip tape.  After watching YouTube so I could figure out how to wrap the bars I was in business.  For one reason or another while putting all the miles I did on that bike I decided it should have a name.  So I named it Charlie after a Charlie Sheen quote I once heard.  “I have one speed, GO!”